North Gujarat
South Gujarat
Kathiawari’s (Saurashtra)
Kutchi
The Bohras
Gujarati cuisine is primarily vegetarian. It has a lot of Jain and Buddhist influence. This land’s cuisine varies depending on four geographical regions, rather than vegetarianism or richness or spices. They are North Gujarat, Kathiawar, Kachchh, and South Gujarat. They bring their own style to Gujarati food.

Gujarati dishes are distinctively sweet, salty, and spicy at the same time. The typical Gujarati meal consists of Roti (Indian bread), daal (Curry) or kadhi (Curry) and rice. The cuisine, spices and vegetables changes with season.

For example in summer season, very less spice is used in cooking and lots of Mangoes and mango pulp are used in many dishes.

Let us see what is predominantly prepared in the four regions mentioned above.
Recipes 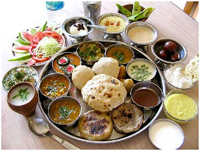